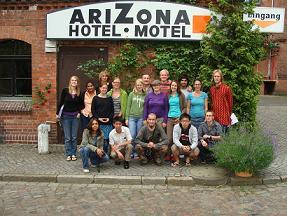 This project aimed at fostering intercultural dialogue and contributing to a better understanding between the EU and its neighboring regions, particularly with and among the countries of Eastern Europe involving 5 young people from EU countries social welfare institutions in Moldova and the Russian Federation, and 3 young people from these countries in social inclusion projects in Germany, Italy and Spain. The involvement of international volunteers in these projects increased awareness about the European Union and fostered the exchange of experiences around cultural diversity and social inclusion.

The volunteer activist is a worldwide campaigns project around young citizen action for social change that seeks to raise awareness of the pressing social concerns of our time. Young ICYE /EVS volunteers work closely together with NGOs to launch campaigns in 17 countries - in Europe, Latin America, Asia and Africa - on wide-ranging themes from the environment, anti-racism, multiculturalism, to volunteering. Find out more by clicking on the logo.