In 1949, 50 German teenagers ventured across the Atlantic and were welcomed as ICYE “exchangees” into host families in the USA. ICYE was born.

Soon a reciprocal programme was established, with youth from the USA invited to spend a year with European families. More and more countries have joined the programme since then. Our programmes have been constantly revised and modified to reflect changes in society at a local, national and global level.

Today the ICYE Federation is an international, independent, non-profit organization with more than 40 National Committees and a significant presence across all continents. Its head office is in Berlin, Germany.

More insights into the development of ICYE can be found in the historical notes by Bill Perkins: “An Incomplete Story – International Christian Youth Exchange – 1949-1972“. 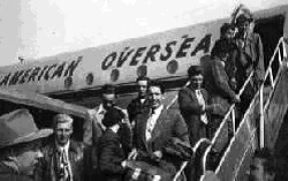 PROGRAMME OF PEACE AND RECONCILIATION

After the Second World War, in 1949, the Brethren Service Commission of the Church of the Brethren in the USA, working with the Cultural Affairs Section of the US Department of State, arranged for German youth to spend a year living in the USA with families and attending high school.  The programme was designed to restore and develop trust between persons in Germany and the USA starting from the conviction that what the war had destroyed, exchanges among the younger generation could help to build again.

THE FORMATION OF ICYE

In 1964, at the Annual Consultation of ICYE, decisions were made to open a European office. This was in recognition of the strength of the European National Committees and the first step towards international cooperation concerning development of the programme.

At the Annual Consultation the following year (1965) in Oslo, Norway, internationalisation was the main issue. For the first time there were representatives from Asia, Africa and Latin America.  A proposal for an International Board of ICYE was given serious consideration.

THE INTERNATIONALISATION OF ICYE

With the increase of National Committees in the developing world, ICYE responded to changing social patterns and movements for social change around the world. It became apparent that the dominant question for the world was, and still is – whether the poor and oppressed could become full participants in society.  The goal of the programme’s emphasis thus shifted from a simple cultural exchange to a means of international education for commitment to, and responsibility for justice and peace. This development of ICYE was summed up in 1972 during the Königswinter General Assembly in the word conscientization, the process of learning to perceive social, political, and economic contradictions and of acting upon them.

More insights into the development of ICYE can be found in the historical notes by Bill Perkins: “An Incomplete Story – International Christian Youth Exchange – 1949-1972”.

In 1973, ICYE optimistically stated:  While the “why” of our programme has become clear, much work remains for all of us on “how” we accomplish the aim to which we have committed ourselves.  It became apparent in the following years that all ICYE participants had to continue to reconsider, to redefine, and re-examine the “why” as well as the “how”.  This on-going process of action and reflection is constantly stimulated by General Assemblies and advanced at a regional and national level.

The organisation’s aims were interpreted differently in each country.  Conflicts and misunderstandings developed  between committees and persons, without the possibility to analyse and understand them as they could not be discussed in a common meeting. This was because between 1974 and 1977, mainly for financial reasons, no General Assembly took place.

In 1977, the old International Council was dissolved.  In September 1977 delegates from 15 countries met in Skálholt (Iceland) to reformulate the goals, to reorganise the structure into a federative system, and to reaffirm commitment to the importance and future of ICYE. Thus the Federation of National Committees in the International Christian Youth Exchange was established.

During the 1990s, at various General Assemblies the name of the Federation and its representativeness was debated. It was felt that the name of the Federation should reflect the identity of the majority of its National Committees, which over the past decade had changed the name of their organisations, placing a clear emphasis on the inter-cultural and inter-religious dimension of the ICYE voluntary service exchange programme. In November 2001, at the 22nd General Assembly in Mombasa (Kenya), virtually all National Committees considered (Inter) Cultural to be more inclusive and respectful of the diversity within the Federation than its Christian heritage. With this common understanding, the Federation adopted the new name: International Cultural Youth Exchange.